2016 Colgate Offshore Sailing Adventures kicked off with a fabulous flotilla cruise in the Abacos, Bahamas. A group of Offshore graduates lead by Heather and Nate Atwater cruised the Abacos November 26th through December 3rd. on Sunsail 444 Catamarans. Here is our cruising log story, with a slide show of some of the places we visited and the people we so enjoyed sailing with on this fun adventure. 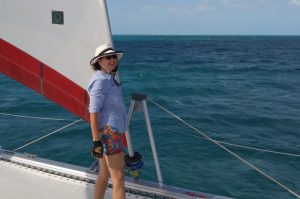 Nate and I arrived on Thanksgiving due to a flight cancellation and rebooking, but there are worst places to arrive early than the Bahamas. We stayed right next door to Sunsail at the convenient Conch Inn and, poolside, met up with Kelly, one of the flotilla sailor who we got to know ahead of the crowd. I checked in with Curly Tails Restaurant, which is also right there, and all the arrangements we had made were set for the next night’s festivities.

Everyone else arrived on time and even early, which started us off on the right foot. Sunsail was great and Rosie accommodated us by having the Skippers Meeting early which allowed us to get on the boats for our briefing early too.  By 7 pm everyone made there way up to Curly Tails Restaurant for a really nice dinner with appetizers before hand in their upstairs bar area that overlooks Marsh Harbour with wonderful sunset views.

Barometer Bob’s forecast was for 10-15 knots from the direction we were heading and in the harbor it was already 18 knots. So we decided to power to Guana Cay for our first stop. Good thing too, since the winds were sustained at 25 knots with gusts to 30. We picked up moorings and quickly headed across Island to Nipper’s which hosts a lively Sunday afternoon pig roast. Music was loud enough to hear over the surf, so many of us danced and made merry. Golf carts were available and we made our way back across Island to eat at Grabbers where we had beached our dinghies. Some folks headed back to the boats to make dinner aboard.

According to Barometer Bob’s forecast the winds were still up and Whale Passage was not passable according to the Sunsail Base, so we headed to Treasure Cay under genoa on a nice reach/run. We picked up moorings at Treasure Key and most made their way ashore to see the long, beautiful beach famed in Corona beer ads. We invited everyone to our cat for cocktails at 5:30 pm and a good time was had by all.

We headed through Whale Passage to No-Name Cay where we dropped a lunch hook and swam ( ran from ) the pigs, collected shells and sea stars.  From there we sailed on to Green Turtle Cay, where we picked up moorings and some of us took a golf cart to Settlement Harbor on the other side of the Island, which was a great adventure, Others chose to visit Green Turtle Cay Yacht Club’s burgee-strewn bar and restaurant.

I started the day many a morning practicing some gentle yoga stretching on the bow of our boat with Diana and others. Next we threw off the moorings and kicked the day off with a beautiful sail on the passage back around Whale Cay, and lunched off of Bakers Bay. After lunch we continued our beautiful Bahamas sailing towards Man-O-War Cay where we again picked up moorings. Déjà Vu invited us all to their cat for cocktails this time and it was another lovely evening of sailing stories and fun.

We decided the night before that we all wanted a chance to go ashore so we did so in the morning visiting the famous Sail Loft where local women sew bags for sale. I loved the history of the place as one of the woman’s father was a sailmaker like mine. We all contributed to the local economy, which  by the way, Man-O-War Cay is very industrious with the boat building too. Next we headed to Fowl Cay Marine Park and some snorkeled the reef while others went to the beach. Some of our crew stayed on the cat and made a big salad.  From there we had a lovely sail toward Elbow Cay, where we anchored right out side Firefly Restaurant. It was a great restaurant, with delicious food and good service and we have a really nice group dinner together!

We powered a short distance to Tahiti Beach where most went ashore and some snorkeled. Rain brought us back to the boats for lunch and then on to Hopetown Harbor where we moored and went ashore the check out the candy striped lighthouse and the adorable town. Dinner and the music festival that evening at Harbor Lodge was enjoyable.

Early start from Hopetown and back to Sunsail Base because some of us had early flights out that day.  Sad to say goodbye to everyone. But many were making plans to join us on the St. Lucia Cruise in March and/or the Amalfi Coast of Italy in September. See you then!