Saturday, July 11, the start of our Apostle Islands Flotilla in Bayfield, Wisconsin.

This quaint lakeside town, population 427, is a very welcoming place, where people routinely say hello as they pass on the sidewalk, even amid the Covid-19 global pandemic. There are several restaurants, shops and hotels, so it is clear the town relies on tourism to a certain extent. All the Offshore Sailing graduates and participants arrived on time even though our flights were canceled entirely, and we had to rebook all new flights. Most others drove or took the sleeper train from Florida- what dedication Diana!

For this flotilla we were sailing three well- appointed monohulls. Sanctuary, is a Jeanneau 49, with Diana and Melissa as crew aboard our boat. Alyeska, a Jeanneau 44, with Eric Buth Skippering with Kelly Buth, Bill Baerg and Birgit Armor as crew. La Bateau a Jeanneau 434 with Skipper Josh Mitchell and Aubrie with Chris Buetler as first and second mate.  It was a small but able group perfect for this COVID-era cruise. The boats hailed from Superior Yacht Charters just outside the town of Bayfield. 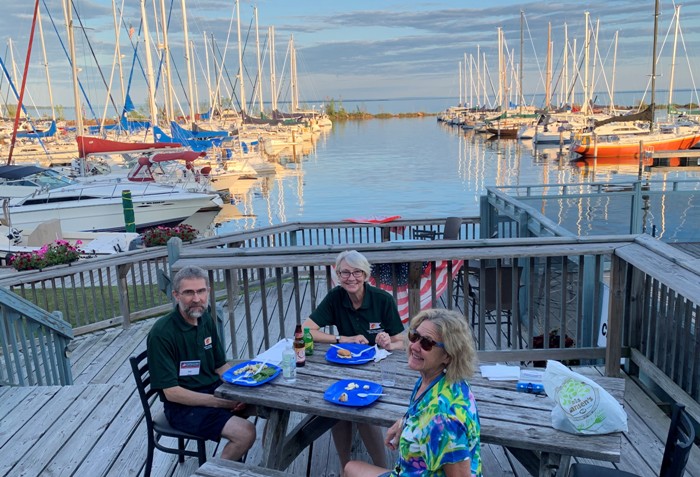 There is a lot to do. We stowed the provisions, our gear, attended the Skipper/Navigator meeting, and went through the boats with the Charter Company to learn where everything is aboard and how to use it all. After all that was complete, we gathered to celebrate the start of our cruise with a Meet and Greet party. This is included in the cost of the Flotilla and on this one we hosted cocktails and a cook out on the deck overlooking the marina. We all got to know each other a bit that night and all had a good time. We spent the first night in the marina and it was a calm and comfortable night. It felt good to be aboard a boat again! 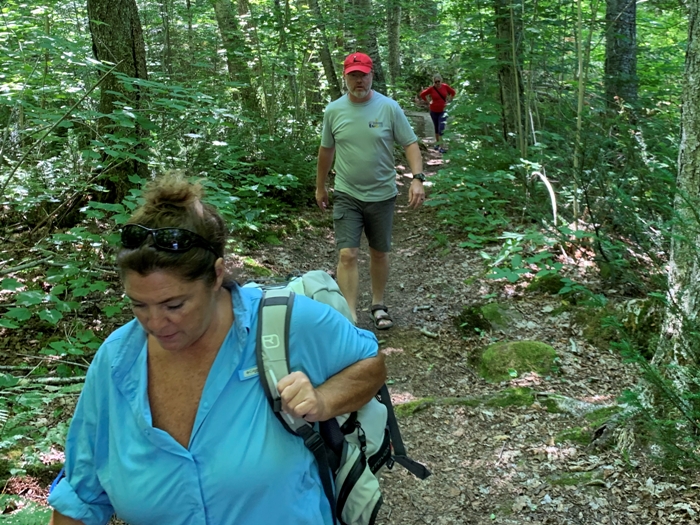 Hiking through the woods

Sunday, July 12, off to Stockton Island

At individual navigation meetings we held on each boat, Nate and I explained where we were going, what to be aware of, and if there would be any day stops etc. It was a nice light air sail day. We set off the docks at 11 a.m. and eventually had to turn on the iron genny to get to Stockton Island, Presque Isle Bay.

After anchoring, we used our dinghies to go ashore and we hiked a short distance to Julian Bay. It was a nice hike and Julian Bay is reportedly where the sand sings when you walk on it. We did not quite hear that but it was beautiful, nonetheless. Also, we were on the lookout for black bears but luckily did not see any. It was a calm first night at anchor and for some of the participants it was their very first time sleeping on a boat at anchor, Cool! 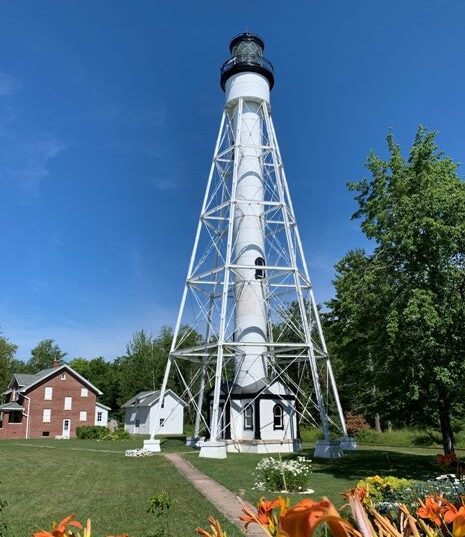 We sailed to Michigan Island on the South tip to see two lighthouses. We walked up the 123 steps (yes Nate counted) to find the lighthouse grounds surprisingly beautiful and well kept with flowerbeds of Lavender, daisy, Rosa Rugosa, daylilies among others. We walked back to the boats for lunch and then set off for Oak Island. We had a wonderful long sail in the afternoon.  We passed the caves on the North end of Stockton Island and saw the balancing rock too! The wind was out of the North and built to 12-15 knots, so, we jibed back and forth on long legs averaging 4 knots. We anchored in North Harbor at Oak Island around 5:15 p.m. and we hosted a cocktail party aboard Sanctuary. It was fun to talk sailing around the cockpit table with our fellow flotilla sailors. That night we cooked up some delicious filets on the grill with broccoli sauté and pasta salad. We were ready for a forecasted middle of the night thunderstorm and it did not disappoint. Around 1:30 a.m. it rolled through, luckily it was mostly lightning and rain and only 20-25 knots for 15 minutes or so. I think we all had a fitful night’s sleep both before and after that. 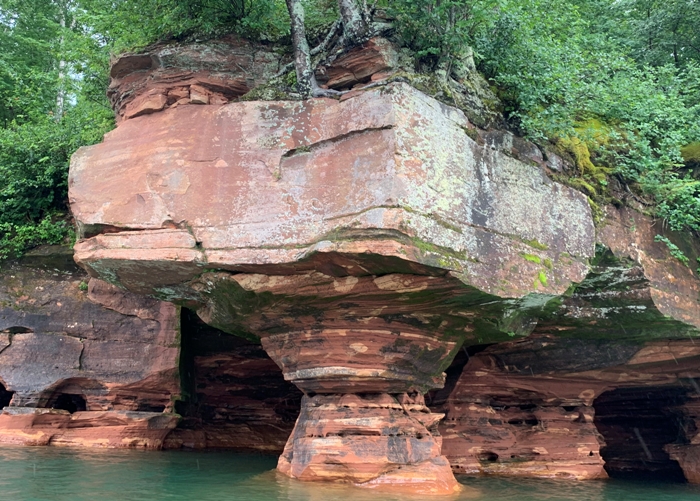 The date started off overcast. We powered over to Raspberry Island and anchored there. The crew from Alyeska went hiking to the picturesque lighthouse even through the rain. They were pleasantly surprised to be shown around by the keeper and got a tour despite being closed to the public due to COVID. After lunch we moved on to Justice Bay on Sand Island. When we arrived we went by dinghy to the sandstone caves.  It was like the beginning of the Alfred Hitchcock movie “Birds,” only flies. They were everywhere but mostly biting us!! Quick tour of the caves then back to button up the boat and swat the flies left inside the cabin. We turned our attention to playing Rummy 500 and it kept us occupied as we fixed a light dinner of Chicken Salad since we had been eating good food all day. We had a good night’s sleep.

Wednesday, July 15, we revisited the caves before sailing to Devils Island

After viewing the caves again, we sailed to the brownstone lighthouse on the North tip of Sand Island. Then we sailed wing-on-wing downwind toward Devils Island. We rounded Devils Island and stopped to admire the unique caves there, with the backdrop of a large lighthouse compound as well. After lunch, we had a great sail up the channel between Rocky Island, Otter Island and Bear Island. (How many places can you say that?) We ended the day at Raspberry Bay on the mainland. Some went ashore to the beach, while others went up the river, only to be turned away because it is the Red Cliff Tribe’s Indian Reservation. We made a yummy cauliflower and vegetable pasta dish and were awed by the amazing sunset and storm cells passing to our North…“Red Sky at night, sailors delight.” 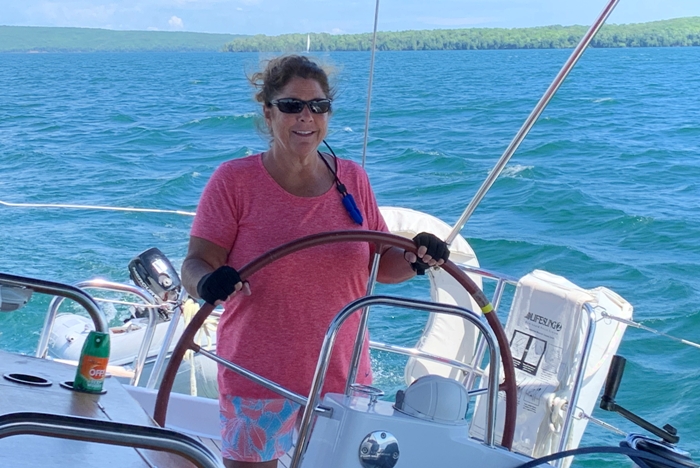 Sailing through the channel

Thursday, July 16, we sailed up the North Channel to Madeline Island Yacht Club

We awoke to a beautiful clear, clean crisp morning. After navigation rounds, we picked up anchor around 10 a.m. to sail around Raspberry Point, between Oak Island and the Mainland, up the North Channel to Madeline Island Yacht Club in LaPointe. It was the most vigorous sail of the flotilla with winds from 17-23 from the South. We sailed upwind to our destination, making good time arriving there at about 3 p.m. Some walked into town, others showered at the Madeline Island Yacht Club marina, others went to the beach. We all met up at The Pub restaurant for our final dinner. Due to COVID, it was an unusual one, being a take-out dinner. The food was very good, and we all enjoyed dinner and drinks outdoor on the patio overlooking the water. 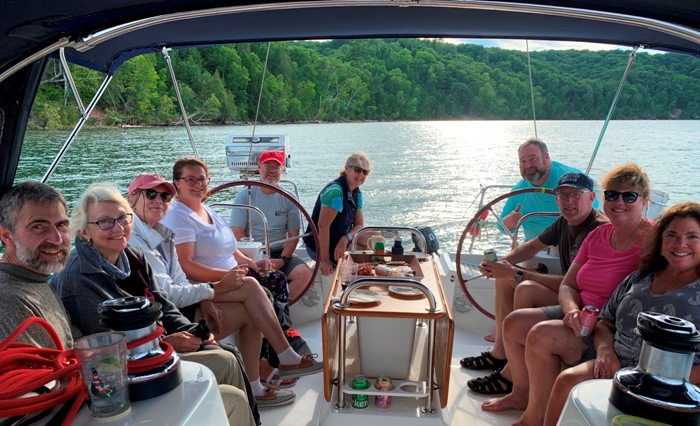 Friday, July 17, we relaxed on the final day

We had half a day on shore to do whatever you liked. Most walked the little town, masks required, and we visited art galleries, shops and the Burnt Down Bar, to name a few. One of the shops had 80 local artisans from Madeline Island.  Around noon we headed back to the marina base, arriving in enough time to clean up the boats and disembark before our appointed time.

That’s a wrap on another great Colgate Sailing Adventures® Flotilla! It was “just what the doctor ordered,” a perfect, relaxing, laid back cruise amid this crazy pandemic. Watch Heather’s onboard interview with Offshore Sailing School grads Josh & Aubrie Mitchell here.

Hope to see you in the Exumas this November! View that flotilla itinerary here.